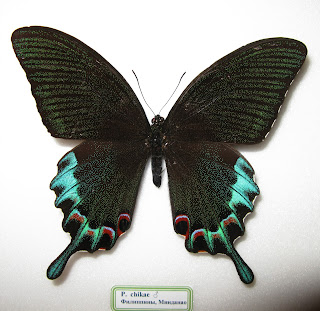 The Luzon Peacock Swallowtail (Papilio chikae) is a species of butterfly in the Papilionidae family. It is endemic to the Philippines. It has two subspecies, with P. c. chikae from Luzon and P. c. hermeli (Nuyda, 1992) from Mindoro. The latter was originally described as a separate species, but it resembles the nominate subspecies and there are no significant differences in their genitalia, leading recent authorities to treat them as subspecies of a single species.
It is listed as endangered by the IUCN and ESA,and is included on Appendix I of CITES, thereby making international trade illegal.
One of the beautiful “peacock” swallowtails, this species has a very limited distribution – endemic to the mountains of Luzon in the Philippines – and was only discovered about 40 years ago . 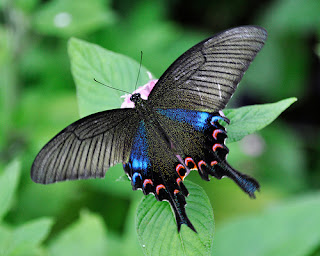 As is true for many swallowtails, the male and female Luzon Peacock are slightly different or “dimorphic” in size and color pattern (females typically being duller in color and larger in size, although this specimen is on the small side). 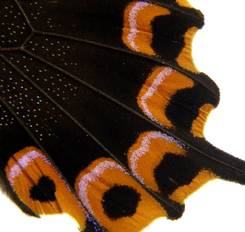 It is one of the over 200 fluted swallowtail butterfly species. Swallowtails differ from all other butterflies in a number of anatomical traits, such as the unique organ that they posses behind their heads as caterpillars, called the “osmeterium.” It is normally hidden and out of view, but when the caterpillar feels threatened by predators, it is used to emit a foul smell. Swallowtails also generally have tails on their hind wings and are migratory.

The Luzon peacock swallowtail prefers forest located above 1500 meters on peaks and slopes and where there are plenty of flowers to visit for its habitat. Little is known about its reproductive behavior. Swallowtails generally feed on the leaves of trees and flowers and lay their eggs on the undersides of leaves.


WHY DID IT GET ENDANGERED?
The Luzon peacock swallowtail is said to fly year round and is easily captured. It is threatened by collecting by tourists and locals who sell the specimens for money. It is listed as endangered, but the Philippine government has done little to protect the species.

We the students of Apeejay School, Pitampura have made a small effort to make people understand about the Endangered Species and to protect them from Extinction.